This year is the 125 years of the Jack the Ripper murders in the East End of London. WHITECHAPEL to be precise.  Infact I work in Whitechapel and walk around the area where Jack the Ripper found his victims.
Now why and I writing about Jack?

We don't have any photos of her, only this drawing and the photos taken after her death.
As a family we never knew about this until someone who was focusing on the victims of Jack contacted my cousin. He had traced her through the family tree.

Catherine's daughter Annie who was 22 when Catherine was killed had disowned her because Catherine was always drunk -- not unusual at that time. and she had stolen money from Annie.


So Annie never spoke to her daughter (my great nan) about her mother.

To say this all came as a bit of a shock 5 - 6 years ago was an under statement. So began the investigation into the killings and trying to unearth information about our family member.

So we took a bus trip to the spot where Catherine was killed. Bizarrely I pass by the very spot ever day twice a day for the past 28 years 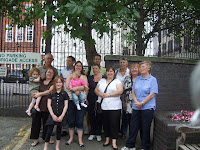 Here are a few of my family as we gather on the spot where Catherine was killed, im the one in the white top

I was asked to be in a Canadian film with a descendant of the first victim Mary Nichols, she came over with the film crew and we met at Manor Park cemetery where both victims are buried. it was a very emotional meeting even if we were being filmed at the time.
I have been over to visit Catherine a few times and each time I have found that someone has left a flower or old pennies on her stone. the victims are remembered through people who don't even know her, which is nice to know she's being looked after 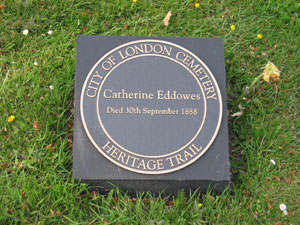