Catherine Eddowes was one of the victims in the Whitechapel murders. She was the second person killed in the early hours of Sunday 30 September 1888, a night which already had seen the murder of Elizabeth Stride less than an hour earlier.

Today myself and my partner Paul headed to the City of London Cemetery at Manor Park to put some more flowers on her grave. The anniversary of her death is actually on Monday,

I have been over to the cemetery a few times since we first found out about our connection with Catherine, the last time was a very cold wet January day when I meet up with the descendant of the first victim Mary Ann Nichols, she had come over from Canada with a film crew to make a documentary about the murders. Mary was the Rippers first victim
Both Catherine and Mary are buried close to each other in the cemetery


I brought a small oasis to place on Catherine's grave 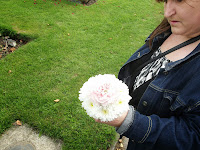 when we got there we started the long walk through the cemetery to locate the grave - seems strange to say but I find cemeteries some what fascinating, I love looking at all the grave stones especially the really old one, some are so beautifully made and some tell the story of the person's life.

Once we had arrived I brushed off the dead leaves that had blown on to the plaque, Catherine's plaque is looking a little worse for wear compared to Mary's, though Mary's is slightly sheltered by a small tree

I am going to try and see if I can contact the Heritage Trail to see if they will restored the plaque and stone, whether they will or not I don't know, but if i don't ask ...
After all its 125 years since her death and a huge part of the East End of London's history

Speaking of history, I had mentioned on twitter about seeing tweets about the Murders.. this really happened its REAL.. women died, families were affected at the time, and even now there are descendants of the victims including myself.
For me although I only found out 5/6 years ago BUT reading some of the "ripperlogists" accounts on twitter and peoples views who follow them. I get upset mainly because people see the whole Jack the Ripper thing as a murder mystery story and not true fact..
there was one person who photographed themselves was kneeling down on the spot where Catherine was killed in Mitre Square holding up both hands doing the V sign. That was very upsetting for me.
BUT like I said it is real and we still remember them. 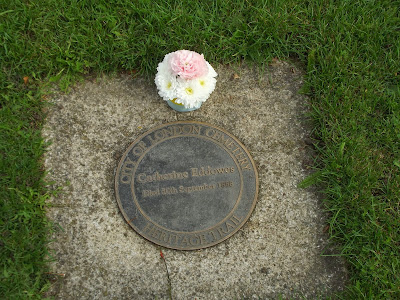 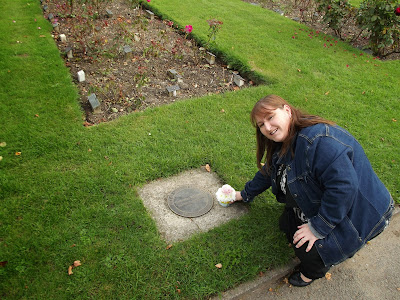 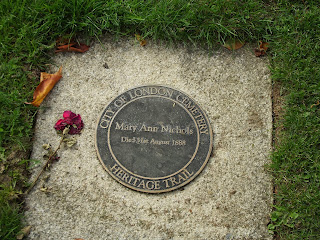 this is Mary Ann Nichols plaque as you can see its slight in better condition than Catherine's lets hope I can persuade the Heritage Trail to fix it up.